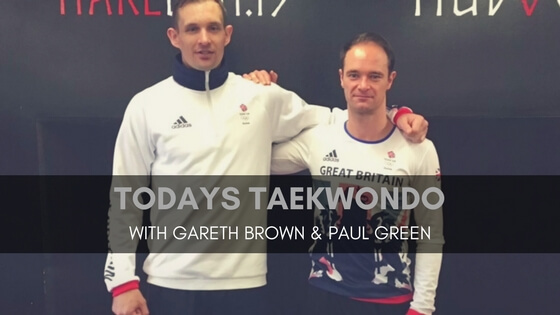 So today’s interview is with Paul Green and Gareth Brown from Todays Taekwondo. Firstly I had to congratulate them on their achievements to date 300k followers on Facebook, the YouTube channel, the website, the downloadable tutorials, and obviously for all the medals that the athletes they’ve coached within team GB have achieved.

We chat about at the numbers 2 golds from the Olympics, 4 world champions, 8 Grand Prix golds, and those are just the ones within the top competitions, we discuss how it must have been great to be a part of those athletes achievements. Todays Taekwondo mission statement says both Paul & Gareth want to continue developing innovative methods to produce world-class athletes and coaches. I ask them when did they both sit down and decide to share their knowledge on a global scale? Did they realise how big it would become and eventually where it would take them both?

The BBC sports website it states one month after resigning from team GB they had both been recruited by USA Taekwondo…… They tell our listeners exactly where they are going, doing, and more importantly if Todays Taekwondo will still be continuing its goal to help others?

Next is a chat about the YouTube channel, I’ve watched them all……the content is impressive, I like how they hold nothing back, demonstrate it, explain it to great detail and show elite athletes also training it. it’s a great way to be, to improve as coaches by giving out everything, ….. we chat about how it must keep them evolving and improving.

Both Gareth & Paul must have seen so many changes in the sport of Taekwondo I ask them both if they still use methods learned back when they were competing or has it evolved so much it’s a completely new set of skills and drills. We take a walk back down memory lane and I ask them if we can look back at both their lives so far, where did Taekwondo start for them both and why did they decide to take up a martial art.

GB Taekwondo has been a major part of both their lives competing and coaching, they’ve both competed and coached at a high level. Which made them most nervous, anxious, or determined, competing or coaching?

I ask them a little about Team GB here as I know after speaking to some of the GB Taekwondo guys they are missed, they have both been a major part of the success GB has had and is continuing to have so don’t miss their answers.

I ask them both, looking into the future where do they think GB Taekwondo will be in the tables and what do they think needs to happen to keep the standards they have both helped to achieve.

What is the long-term goal for Paul Green and Gareth Brown? where do they see themselves in 5-10 yrs, does their own training centre come into it or do they want to be the coaches the countries come running to when medal counts get low……?

I ask them what is each of their proudest moments. What advice do they have for up and coming athletes and also coaches looking to make a difference?

And finally the one last question from me, what is it that makes Taekwondo different to other martial arts and how would they describe what it takes to be a black belt?

How can you get in touch with them? See links below.

It was an enjoyable interview and I look forward to interviewing them both once they settle into America.